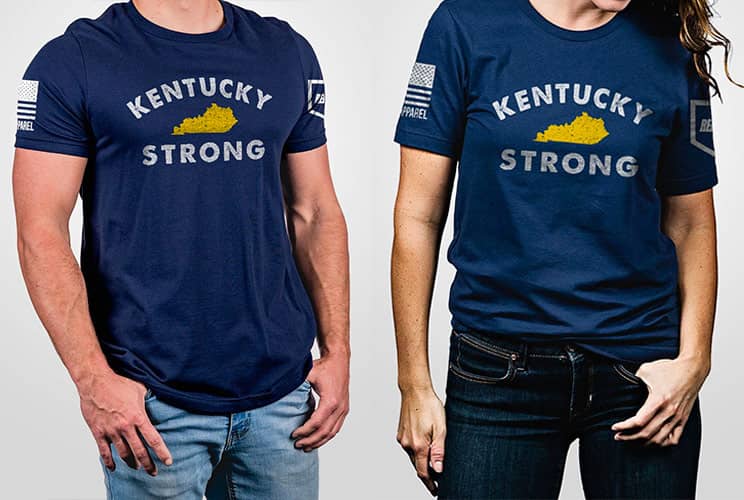 JOIN THE MOVEMENT, SHOW SUPPORT AND YOU GET A PREMIUM LIMITED EDITION SHIRT

With the holidays right around the corner, we appreciate you taking the time to show support.

If you’re unable to help support this initiative economically we’d appreciate even just sharing this with your friends and family to help bring awareness to those in need.

With such a devastating natural disaster NINE LINE APPAREL’s CEO, Tyler Merritt, and REDCON1’s Founder, Aaron Singerman, have united to bring support to the survivors of this tragedy. This collaborative fundraising initiative, #KentuckyStrong, includes a limited-edition co-branded shirt where all of the proceeds are directly donated money and supplies to those directly in need from the tornado.

Since the storm hit, there has been an outpouring of support from across the country. A groundswell of Americans and businesses around the United States have reached out to donate money, clothes, and other supplies to help those who have lost everything in the storm.

Officials are still working to asset the damage to both homes and buildings. The tornado measured a category 4 on the EFS. The scale goes from 1-5 and is used to measure the intensity of tornadoes.

The newly built or re-built homes in Western Kentucky were especially hard hit by the tornado as over 15 brand new homes, just finished and occupied within a month, were destroyed. When asked about future building plans, those who had houses destroyed said they would wait until after spring before they decided how to continue forward with their lives now that so much was lost so suddenly.

“Lives are more important than buildings,” one man told reporters as he surveyed his property for what must have been the 100th time today, “…if we don’t take care of people, then we’ve got nothing.”

You might not know but Kentucky has a patriotic State motto “united we stand, divided we fall” and so far, this slogan has held true to the immense tragedy that struck throughout yesterday evening. Despite losing homes, communities, and loved ones out of nowhere, Kentuckians have banded together in the wake of the unprecedented destruction brought on by what is being called “the worst storm Kentucky has ever seen.”

Celebrities are stepping up to bring both awareness and financial support

Several celebrities have also stepped up to help. Jennifer Garner and her organization Save the Children have set up a relief fund for the victims of the tornado. Other celebrities, such as Dolly Parton and Kenny Chesney, have pledged to donate money to help the victims rebuilding their homes, businesses and community centers that were demolisted by the storm.